In a place such as this, the prison guard had already gotten used to visitors making their way here………but the hair color today was different from usual, he thought to himself.
A pretty girl with long red hair done up in twin tails, that was who came down to the dungeon for a visit today.

Until now it had always been a Prince or some young noble man who has been the source of the pitter-patter that came from someone walking down those steps; this was the first time it had turned out to be a young girl.
……….although when you put it like that, this might not seem that unusual…………

Although people break in here anyway……..was what the girl inside the prison cell would have assuredly thought if she had heard what the prison guard had said.

“I already know! Please notify Rachel that Margaret Poisson has come to meet with her!”
“After all please listen…….”
“What is it? Now, quickly!”

Young people nowadays really only want to show their chins¹, was what the prison guard thought to himself as he reluctantly made his way down to the dungeon.
The young lady proudly followed close behind.

When they arrived inside the dungeon, the girl called Margaret immediately ran up to the steel bars.

I have no idea who this girl who starts loudly yelling out some greetings early in the morning is………., the prison guard was already making excuses as he broke out in a cold sweat.
He didn’t know the reason why, but lately the prisoner had been sleeping in until late in the morning. In fact she was still in bed now. Now here she was being roused out of bed…….
Although their acquaintanceship has been short, he was fully aware that that outrageous woman hated being disturbed (Although because she had always initiated all of their conversations, there were no examples of her being disturbed that came to mind). What happens if you force this my-pace woman to wake up………
The prison guard took his distance from the iron cell in the face of the unknown.

Despite the prison guard’s fears, Rachel woke up relatively calmly.

She pulled her head out of its place deep underneath her duvet, and clumsily rubbed her eyes. When the upper half of her body rose out of bed, she saw the girl who was calling out to her.

It took a while for the words she was saying to make it through Rachel’s early-morning dopey demeanor, but eventually Rachel’s eyes were able to come into focus and she got out of bed.

“Mou, have you finally woken up!? You’re such a sleepyhead!”

The redheaded woman was at full tension as she continued to shout while clinging to the cell bars, and Rachel gradually made her way over.
Watching on, the prison guard thought to himself, “Ah, is she a friend or something?” as he thought that that might be why she wasn’t criticizing the young girl for waking her up.
A wave of relief washed away the stress that had been building up for the prison guard. 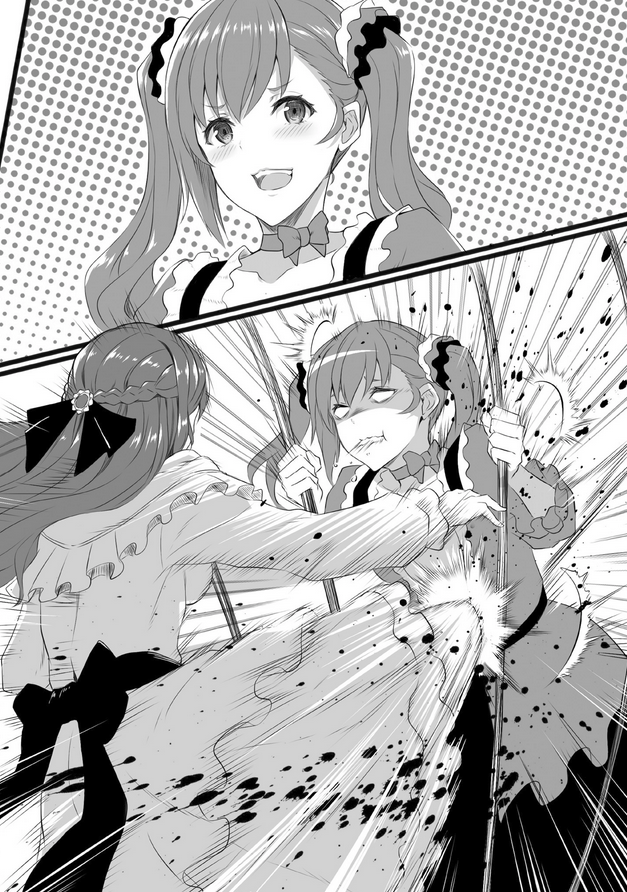 Rachel’s flying knee kick dexterously made its way inbetween the bars of her cell, being absorbed by the solar plexus of the redheaded girl.

The visiting girl made a silent scream as she flew backwards.
The red-haired girl groaned as she painfully rolled back on the stone floor. Because she was clinging to her stomach without worrying about the cuts and bruises she had gotten from rolling on the floor though, it seems like the blow from the knee-strike worked quite well.

As the girl tried to choke out a question between her short gasps, Rachel looked on visibly shocked.

“Ah, I’m sorry. Your stomach looked like it would be a good place to hit once, so I unintentionally………”
“What kind of reason is that!?”

While the girl slowly got back to her feet with gritted teeth, Rachel gave some rough commentary.

“No, it’s the truth? You, you give off a really amaaazing feeling. That’s why, it’s like wanting to pull on the cheek of something cute or wanting to slap the butt of someone you like. Mou, the whole aura you were giving off was begging me to hit you! I, I’ve taken such great care over the last decade to make sure I don’t raise my hand against someone……….but now I’ve lost to my temptations and put my knee on another.”

Still clutching her stomach the shivering redheaded girl waved her hand and beckoned over the prison guard.

The prison guard fearfully came close as the young lady grabbed and twisted his collar with a surprising amount of strength.

“Hey, what’s with this guy!? Providing this kind of ‘greeting’ upon an encounter, is she truly the daughter of a noble!? Even the ‘professionals’ inside slums aren’t this uncouth!?”
“Even if you ask me that……..”

The red-haired girl was raised in the downtown streets, so she had been brimming with youthful enthusiasm at first, however any trace of that energy had disappeared completely in front of the prison guard as if it had all been a lie.

“That, is that truly Rachel Ferguson!? The daughter of a Duke’s house!?”
“I don’t really know the situation that well, but I suppose so?”

While the two of them were whispering their grievances at each other, the still worked up Rachel continued to praise the girl from inside the prison.

“The longer I look at you, the more amazing you appear! Ten years, no this is a once in twenty years talent! There’s no doubt, you have a talent as a sandbag that nobody else could ever hope to match!”
“What kind of talent is being a sandbag!?”

What strange praise.
Rachel clung to the iron bars and began begging the young lady.

“Ten blows would be all I’d need, please, let me work some slaps on your face!”
“I didn’t like the first one!”

The contents of the request were strange again.

“Then just five! I should be able to make do with just five!”
“Can’t you listen to what people are telling you!?”
“No, you don’t say.”

The exchange continued……….and seeing the young lady who was finally able to stand up albeit trembling like a newborn deer, Rachel suddenly tilted her head.

“By the way you……..have we met somewhere before?”

The angry red-haired girl once again beckoned over the prison guard.

The prison guard fearfully walked forward again trying to protect his collar, but the young lady grabbed it right when he began to drop his guard.

“What • is • with • this woman!? What does she mean she doesn’t know me!?”
“No, I don’t really know…….”
“Well I’ll leave that aside for now……….no, wouldn’t it be too weird if we just left it!? Punching someone in the gut who not even ever having had a conversation with before, but who she thinks she’s never even met before, what is going on inside her head!?”
“Even if you ask me……..”

Rachel is Rachel, and from inside her cell, she was resorting to bribery while using a coaxing voice.

“Heeeey~, how about I buy you whatever you want? So, just let me beat you a little?”
“Would you just give it up!”
“I suppose……..after all, you should be able to hear a snap or take a beating right? You could enjoy the feeling as I pinch your little soft cheeks……….you, understand?”
“Quit talking as if you know who I am now! Why is the genuine article so different…….”

The redheaded girl whose legs finally stopped trembling pointed at Rachel with a *snap*.

“I’m not sure if you’ve truly forgotten me or not, but if this is what you’re really like, then you’re already black!² Don’t you know if you apologize to Elliott you’d already be out of here? I came here just to tell you that!”

Rachel leaned up against the iron bars.

“My apology…….should I apologize for using you as a sandbag first?”
“Apologize! Are you calling yourself some kind of vigilante!? You’re dangerous!”
“No, but Miss is already in jail though.”

While taking enough distance away from the cell, Margaret started yelling at Rachel.

“Hmph, if that’s the attitude you’re going to have then fine! Then you’re fine with not being able to watch as I sweetly grow into Elliott’s princess!? It’ll be too late to regret it later!”

The girl’s footsteps echoed outward as she ran up the steps while Rachel and the prison guard saw her off.

After any sign of the girl had disappeared, Rachel turned to the prison guard.

“In the end, who was that girl?”
“She said she’d become a princess, so does that mean she’s somebody that the Prince okay’d?”
“I feel like I’ve seen her somewhere before but……..I’ve heard her name before too.”

Rachel thought for a bit, but since she couldn’t remember, her thinking soon changed to something else. She then looked over in the direction that the red-haired girl disappeared.

“Ah, I want to hit those plump little cheeks with a forehand/backhand combination…….a nostalgic fire’s been re-lit and my old childhood habit is making a comeback. On this occasion, I want to beat her even more than His Highness.”
“The other party in these hypotheticals are some big names……..”
“Oh yeah? They aren’t that big of a deal. A long time ago, I sunk him in a pond.”
“Sunk in a pond……….the Prince!?”

The prison guard was surprised and repeated back what he heard, but he gained no reply in turn.
When the prison guard looked back, Rachel had crawled back in bed and put on her eye mask.

“An idiot woke you up, so you’re going back to bed?”
“Yes. I want to dream before forgetting this wonderful feeling.”
“You’re seriously pleased with all this…….I don’t know who she was, but that girl just met with some misfortune.”

In Prince Elliott’s office, the daughter of a baron Margaret Poisson had her arms wrapped around her darling Prince. And then she sneezed.

1. It’s a Japanese idiom that means you think highly of yourself.